Home 2.0 Before and After: The master bedroom wall 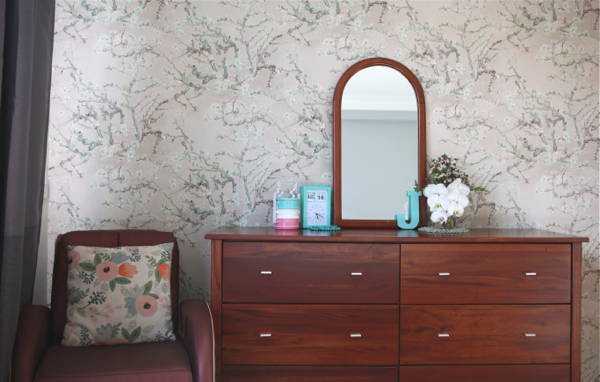 Hello! We've had many requests for a house tour, but to date we're still unpacking and getting our stuff sorted! I think it's probably going to take a long while, so instead of a final grand tour, I'll periodically be sharing peeks into various parts of our home as we get them done. (Meanwhile, you can follow most of our home updates over on Instagram @justtey.)

Today, I wanted to show you a part of the master bedroom that I really love. The previous owners of our new home had a fair bit of built-in cabinetry done, and we had to decide which of these we wanted to keep, and which we wanted to demolish (since we didn't have the budget to overhaul everything). The master bedroom featured a walk-in wardrobe that was basically two sets of cupboards built facing each other, with the back of one acting to partition the wardrobe space off from the rest of the bedroom. Essentially (if you can see the lower left picture), the wall facing the bed was covered with a mid-brown tone laminate, along with a built-in cabinet that had some glass doors. The cabinet didn't work for us, since we needed drawer storage for clothes. I didn't like the glass doors too, since they were a hazard with the kids, plus I preferred that the mess inside was concealed. So we opted to hack away the cabinet.

Now the question was, did we want to just replace the back of the wardrobe with a new sheet of laminate, or did we want to do something else? I thought that laminate didn't look nice, especially if we were to push our existing chest of drawers against the wall. So we decided to explore the idea of using wallpaper instead. 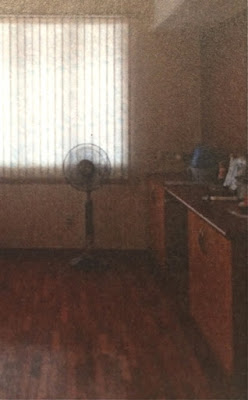 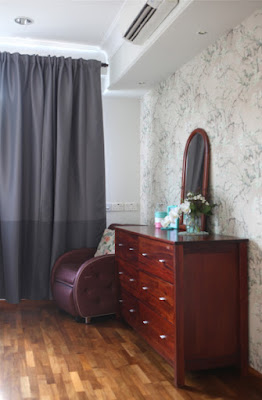 A friend gave us a contact for a company that sold Korean wallpaper, but we couldn't find anything that we liked. The same friend had recently wallpapered part of her home using wallpapers from a Rice-Eijffinger collaboration, and I really loved them. These she purchased from Wallhub, so we paid them a visit.

We met up with Avan from Wallhub, and he patiently showed us what they had in stock. The range was mind-boggling, and we initially were rather overwhelmed by how many wallpapers we liked and wanted to use! Wallhub stocks many European brands of wallpaper, and there were so many pretty designs. After flipping through stacks of catalogues and having a heated debate with the hubby, we managed to narrow our selection down to a few Rice wallpapers (I loved the bright colours and happy designs!), along with a few other designs from other brands. 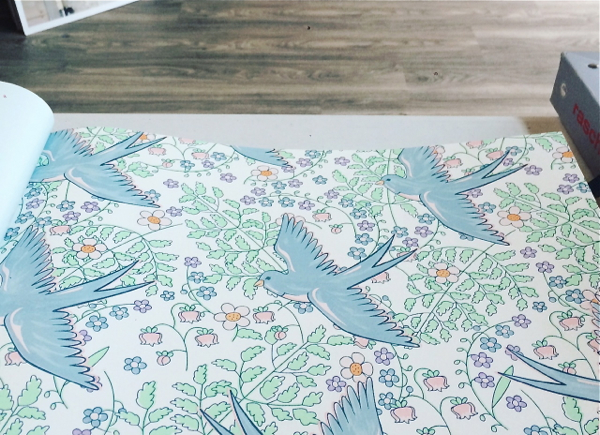 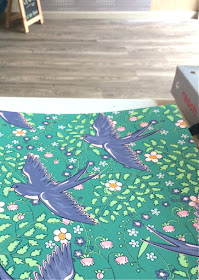 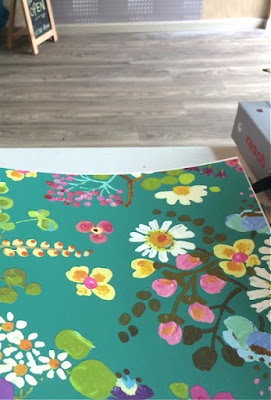 In the end, we decided to go with a lovely Van Gogh wallpaper by BN Wallpaper, instead of going with the Rice designs, which on second thought were a little too youthful for use in a master bedroom (I am still hoping we can do up some wall in the home with Rice wallpaper though!). We fell in love with the Van Gogh line, which features wallpaper that is richly textured, as though the painter scraped his palette knife across the walls itself. The designs were inspired by Van Gogh's various paintings, and we particularly liked the ones that were based on his painting "Almond Blossom", which were of a flowering almond tree. The original painting had the tree painted against a blue sky, but the wallpaper came in four background colours of dusky pink, white, blue (like the original) and a deep warm yellow. All four were gorgeous, but we thought the pink would be the most suited to our colour theme. 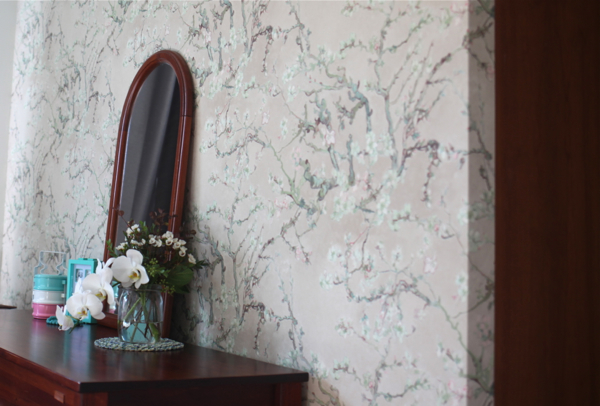 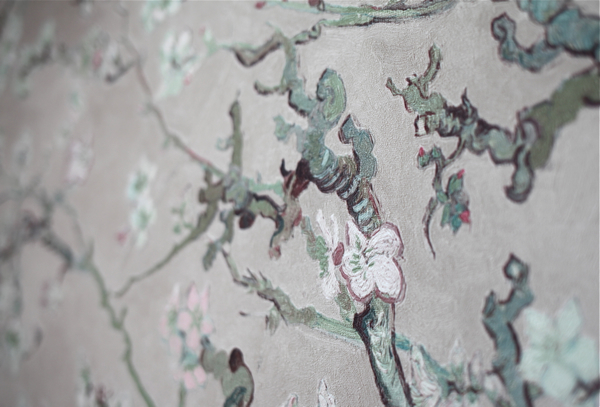 It was only after we had purchased the wallpaper did I discover the significance of the painting by Van Gogh. "Almond Blossom" was painted for Van Gogh's nephew, who was named after him, and the almond tree was selected as a symbol of new life. It was rather apt, since these almond tree branches would be sheltering our own little baby too, as she slept in the cot in our room. 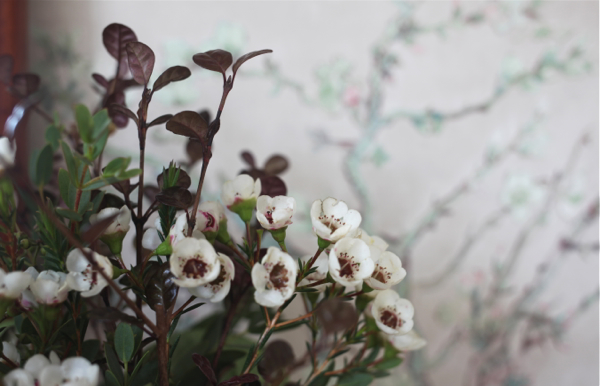 The installation of the wallpaper was done by Wallhub, and was quick and fuss-free. The installers even cleaned up after themselves! I really don't know how they do it, but you cannot see where each piece of wallpaper connects to the next, and everything is seamlessly connected. 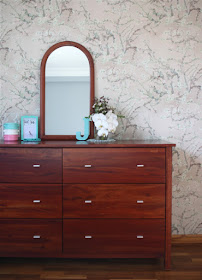 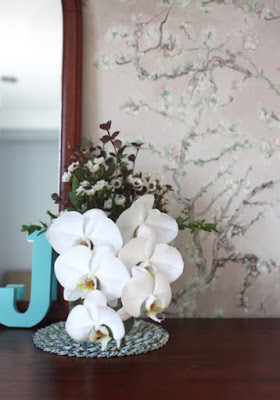 We moved our ten year old chest of drawers over, to replace the built-in cabinets. It fitted the space perfectly, along with the massage chair. I'm trying to keep the dresser top as clear as possible, and it helps that I'm a no-frills person when it comes to skincare (plus I don't wear make-up). 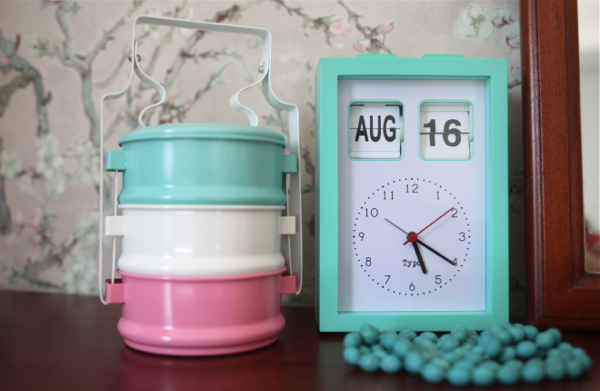 The tiffin carrier houses the few pieces of accessories that I wear, which these days are mainly silicon bead necklaces that the baby can chomp on. I couldn't resist adding flowers too (these are from a flower subscription, which I would be sharing more soon). We also took down the old existing blinds, had curtain rods installed, and bought some dark grey curtains from IKEA. 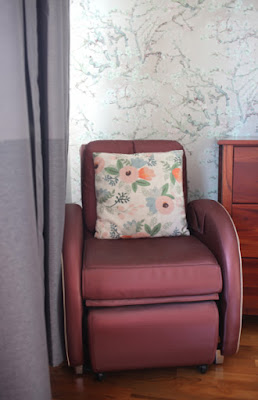 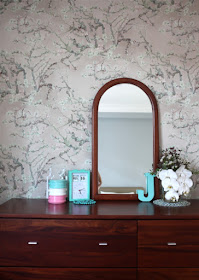 Because of the lovely texture of the wallpaper, Baby J cannot resist running her hands over the walls. 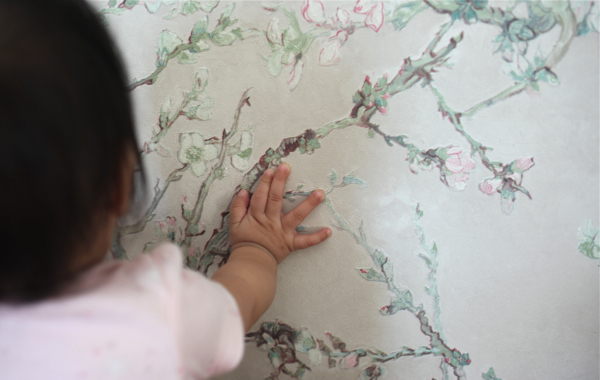 I think she approves. 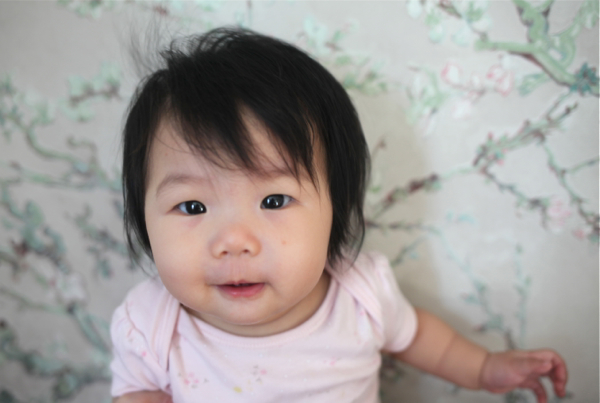 I do love how the wallpaper brightens up the room. No regrets choosing this over brown laminate! Now, on to sorting out the rest of the room...

Disclaimer: We were given a discount off installation costs at Wallhub, but we paid for the rolls of wallpaper. No monetary compensation was received and all opinions are my own.
Mum in the Making
Share